I came upon 2 studies recently which really piqued my interest immediately. The suggestion by many patients that the mobile “lump”/nodule in their lower back is “causing” their trouble is VERY common in my experience. These two commentaries point out that in fact the patient may not just be imagining that the proximity of the lump to their pain isn’t coincidence…the nodule may well be the source.  I have encountered several notable cases of this over the last 28 years, but recently had a post-surgical patient absolutely convinced that “the damn lump in my back is giving me the pain!”…”but no one will believe me”. After probing the area it became apparent that it wasn’t just an “overlaying” lump (common with many lipomas which are not a pain source), this lump appeared to be the actual source of the pain. the pain interestingly enough was a “discal” like pain but with nebulous motion-findings. The lump was injected, pain relief was dramatic and it was removed. And the patient was extremely satisfied with the outcome.

[Episacral lipoma: a treatable cause of low back pain].

Episacral lipoma is a small, tender subcutaneous nodule primarily occurring over the posterior iliac crest. Episacral lipoma is a significant and treatable cause of acute and chronic low back pain. Episacral lipoma occurs as a result of tears in the thoracodorsal fascia and subsequent herniation of a portion of the underlying dorsal fat pad through the tear. This clinical entity is common, and recognition is simple. The presence of a painful nodule with disappearance of pain after injection with anaesthetic, is diagnostic. Medication and physical therapy may not be effective. Local injection of the nodule with a solution of anaesthetic and steroid is effective in treating the episacral lipoma. Here we describe 2 patients with painful nodules over the posterior iliac crest. One patient complained of severe lower back pain radiating to the left lower extremity and this patient subsequently underwent disc operation. The other patient had been treated for greater trochanteric pain syndrome. In both patients, symptoms appeared to be relieved by local injection of anaesthetic and steroid. Episacral lipoma should be considered during diagnostic workup and in differential diagnosis of acute and chronic low back pain. 2000 Apr;49(4):345-8.

Fibro-fatty nodules and low back pain. The back mouse masquerade.

Few useful interventions exist for patients with persistent low back pain. We suggest that a fibro-fatty nodule (“back mouse”) may be an identifiable and treatable cause of this and other types of pain.

We describe 2 patients with painful nodules in the lower back and lateral iliac crest areas. In both cases, the signs and symptoms were unusual and presented at locations distant from the nodule. One patient complained of severe acute lower abdominal pain, and the other had been treated for chronic recurrent trochanteric bursitis for several years.

In both patients, symptoms appeared to be relieved by multiple injection of the nodule.

There is agreement that back mice exist. Referred pain from the nodules might explain the distant symptoms and signs in these cases. Multiple puncture may be an effective treatment because it lessens the tension of a fibro-fatty nodule.

Randomized trials on this subject are needed. In the meantime, physicians should keep back mice in mind when presented with atypical and unaccountable symptoms in the lower abdomen, inguinal region, or legs.

On the Kdt Neural-flex we incorporated the leg and hip support (creating semi-fowler positioning) into the “bolster-less” leg feature. This eliminates the need for a separate tilting-piece and the clumsy and cumbersome knee bolsters…which offer zero variability.

The table-section however allows a near infinite degree of elevation and tilt. Some patients and conditions require greater elevation others less. The extent of leg/hip elevation is most typically based on patient comfort and convention i.e. approximately 30° for most. As to objective indicators there aren’t any absolutes. We recommend the table remain fully “down” for most supine treatments, but elevation will change the angle of incidence (as will the leg support section) so “playing” with both can help locate an optimum pull vector. In 1997 the DRS introduced the concept of “targeting” discs…L5 was 10°, L2/3 30° etc. Though not technically possible, IF a less than optimum response is seen with the typical 30° pull, table height and leg-elevation changes can often cater the pull more to the individual and potentially improve the outcome. However knowing the perfect angle prior to the treatment is doubtful.

Don’t underestimate the value of seated ‘chair-lifts’ both as an important testing procedure for “compression but also as a counter to the discal stress imposed by daily sitting. Holtzman, Froyer, Saunders and others have examined the decompression effect and benefit of this maneuver and found that it indeed both relieves pain and restores height i.e. fosters disc fluid imbibition in people who sit a lot during the day. “Sitting is the new smoking” takes on a chiropractic edge when you realize the damaging effects on the lumbar discs. Instructing patients to try this “self-decompression” 30-60 seconds (dependent on their strength) several times per day can help pain and possibly disc nutrition & revitalization.

Dr. Kennedy comment: I (and many others) have adopted a lot of ’hands-on’ techniques with decompression since the advent of the “Open” and now Versa-Belt. Ostensibly directed-vertebral contact with an acute HNP or nerve encroachment condition may be counterproductive…however since 90% of presentations are typically less severe hands-on methods during traction can add both clinical benefit and an excellent “selling proposition”. I typically “strip” or deep-pressure the muscles during the rest-phase and let the patient feed-back be my primary guide. Manual oscillations can also be effective.

Dr. Kennedy comment: another study questioning the ‘curve’ and it’s relation to symptoms. I call attention again to Dr. Eyal  Ledermans’ article: “The fall of the postural-structural-biomechanical model”. However, irrespective of these findings I still say all I’d rather have a ‘good’ curve in my own neck.

Dr. Kennedy comment:  One of several studies & Meta-analysis of the cervical ‘curve’.  Most are consistent in the determination the curve doesn’t appear to be directly correlated to pain, disability or future prognosis (but this population were asymptomatic, other studies (Gore 1989) suggest only 10% of kyphotic necks are pain-free).  And non-lordosis configurations were related to the most serious protrusions……So(?) that means something!

The Neck Deck is our inexpensive offering to help address the cervical sagittal alignment. If a patient has persistent neck pain forward head posture, loss of curve, tension myofascial effects and inefficient contraction patterns there should be a strategy to address each of them. 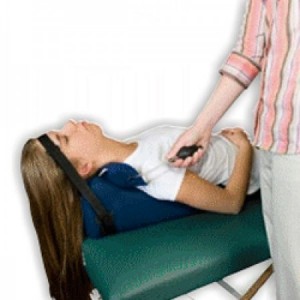 Through 3.5 million years of development we humans find ourselves with lordotic curves intra-uterine. Clearly someone wanted our lower backs and necks “curved” i.e. extended. Numerous published studies suggest extension is the most common directional-preference in HNP conditions and McGill and others show how extension “shuts off” the LE activity thus reducing the crushing-effect of the hyperactive/hyper-tonic posterior muscles endemic in so many with cLBP (Janda’s lower cross syndrome). Further at least 2 recently published studies (Mustafa) show HNP can be effectively treated using extension traction methods. Magnusson, Pope et al (1995)also demonstrated that prone extension postures restore height and have an “unloading” effect on discs equal to or better than flexion postures.

Both a ‘stress-shielding’ (neural arch impaction reducing posterior disc compression) and nuclear “migration” (an intact, hydrophilic nucleus that moves as an isotropic mechanism under pressure) can explain extensions benefit…. but neither is definitive in all cases. It’s not surprising however that extension appears most immediately beneficial in cases of moderate disc degeneration (the arches are already approximating).

So we try to exploit this with our decompression positions…when an extension benefit is apparent prone traction becomes a necessity…when it’s not apparent (or neural stress signs/stenosis or an “anterior disc” manifests) supine is probably the best call. 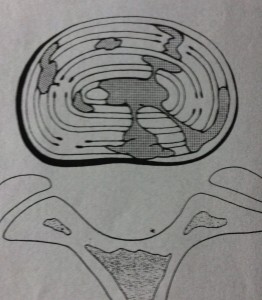 The discogram shows the effects of IDD (internal disc disruption) and clearly demonstrates why a desiccated and internally degraded nucleus will NOT give “normal/typical” migration-bending effects e.g. flexion & extension findings are ‘inconsistent’.
Since IDD is very common and it’s adverse effects on the hydraulic nature of the disc create a higher potential for annular tears (intolerance to torque) its important to understand its implications to treatment.
Though by no stretch entirely age-dependent it is more likely later in the 4th & 5th decades and suggests why repetitive extensions (facilitated movements) can be counterproductive and prone/prone extended decompression less of an imperative.
In younger populations it can be ‘assumed’ to be present when only one lumber disc is very ‘thin’ but the remainder appear normal. If its L4/5 (less common) typically we still try prone. If L5/S1 we more often go supine.

In this study cohort, minor trauma does not appear to increase the risk of serious LBP episodes or disability. The vast majority of incident-adverse LBP events may be predicted not by structural findings or minor trauma but by a small set of demographic and behavioral variables.

Dr. Kennedy Comment: This study is yet another (and nearly10 years old) indicating psychometric, financial/compensation and likely lifestyle issues (e.g. smoking) are huge drivers of long-term LBP & disability. But we can’t lose sight of the connection our counsel, enthusiasm, kindness & confidence have in establishing a positive and substantial healing environment. High-power Laser and decompression and ‘movement therapy’ play a major role in those aspects.

TUESDAY, May 19, 2015 (HealthDay News) — Doctors often prescribe oral steroids (Medrol) to treat sciatic symptoms – often caused by a herniated lumbar disk.
But a new study finds steroids are no more effective than a placebo for the pain and provide only modest improvement in function.
Sciatica affects about one in 10 people in their lifetime, the researchers said. For this study, 269 people with sciatica were randomly assigned to take an oral steroid (prednisone) or a placebo for 15 days. The participants were followed for up to a year.
“When we compared the prednisone to placebo, there was a modest improvement in function,” said study researcher Dr. Harley Goldberg, director of spine care services at Kaiser Permanente San Jose Medical Center in California. People reported they could go about their daily activities somewhat better than before.
However, “when we compared the pain [between the two groups], there was actually no difference,” he said.

Dr. Kennedy Comment: Many nutritional proponents suggest a “high inflammatory/metabolic syndrome” diet directly influences the pain (and thus level of disability) from HNP. In fact Dr. Seamen reports that MMR and other pain/inflammatory mediators are only “turned on” via inflammatory dietary influences….without them HNP remains “benign”. Perhaps those showing non-response are already too systemically inflamed and even steroids can only provide modest benefit.