Conclusions: “The study found NO differences in cervical IV-ROM between non-specific neck pain patients and matched controls. There was a modest dose-response relationship between the number of manipulations given and number of levels increasing IV-RoM, suggesting manipulation may have a mechanical effect at segmental levels. However patient-reported outcomes were NOT related to this”.

Hypo-mobility is commonly considered an indication for manipulation. Due to the changing nature of these motion-features….hypo-mobility or paradoxical motion in response to manipulation may not be possible or meaningful.

“The results suggest that cervical and thoracic thrust manipulation induce similar changes in the above findings the changes are small and do not surpass minimal detectable change values. Since no control group was used placebo effects cannot be ruled out”.

Lack of efficacy of manual therapy in children with suspected cervicogenic headache.

“We did not find a significant difference comparing cervical spine manipulation in 52 children.

Conclusion: “There were no differences in HA-related characteristics between the groups at baseline. At 12-month follow-up both groups had significantly reduced frequency and intensity. The combined-therapies was not significantly superior to either therapy alone.

Crazy traumatic cervical injury….asymptomatic (excepting mild stiffness & torticollis) without neurological signs or symptoms. Surgery WAS done but entrance findings were minimal without clear indicators of “what lies beneath“.

Not sure what it means….but radiographs after trauma may not be a frivolous idea.

“If your back hurts Physical therapy can be your ticket”.

“Whatever your needs your physical therapist can come up with a treatment plan to suit your needs”.

“Your therapist may use manual therapy which means “hands–on” treatments to help ease pain and boost flexibility. It can include:

MANIPULATION: your therapists puts pressure on your body with his hands or with a device“.

So there you have it…..Chiropractic performed by 184,000 PTs….endorsed by the AMA and available in every hospital in the country.

So there is your best reason to be awesome….effective….available and affordable! It’s not just rhetoric, our careers are on the line!

This Australian study with 140+ patients was based on determining whether manipulation or Graston technique had a discernible benefit vs. placebo (nothing) in a randomized controlled setting. The conclusions not surprisingly showed no benefit at “any time point” vs placebo for thoracic spine pain. It was noted this was the first RCT of its kind comparing manipulation and Graston for TSP.

There were no differences noted at 1-3-6 or 12 months however ALL groups tended to improve over time (natural regression) including placebo-control group.

Studies which are well-controlled to reduce bias suggest manipulation has limited effects (long term) on pain or underlying pain generating mechanisms. A recent Cochrane systematic review of over 200 studies concluded: “spinal manipulation offered no benefit beyond that of any other standard treatment or no particular treatment. Further, given the common minor adverse side effects and potential for random catastrophic outcomes spinal manipulation cannot be recommended for treatment of any known condition”.

Fortunately these reviews, though seen by insurers and researches tend not to be accessed by the general public and their impact appears to be mitigated by the overall acceptance and enthusiasm manipulation enjoys.

It should however make every DC aware that, though we tell ourselves otherwise, much of what we do is not proven or based in substantial scientific outcome-evidence.

Having a strong working knowledge of rehab (e.g. McGill etc) is a necessity when competing with PTs and evidenced-based medical rehab centers.

This interventional study (which we discuss online) demonstrates that when an extension directional preference is NOT apparent an irreducible disc and potential nerve root irritation or compression may be a cause. The patient is extended (in this case 10 times)…non-response or peripheralization of leg-symptoms can be a valid clinical clue. When NO facilitated motion can be elicited to centralize pain traction (prone with mild-to-moderate flexion in this case) is the rational additional treatment. When prone positioning is untenable then supine becomes the default treatment posture. Either way traction often allows an ‘initial’ extension-non-response (irreducible) to become reducible over-time. 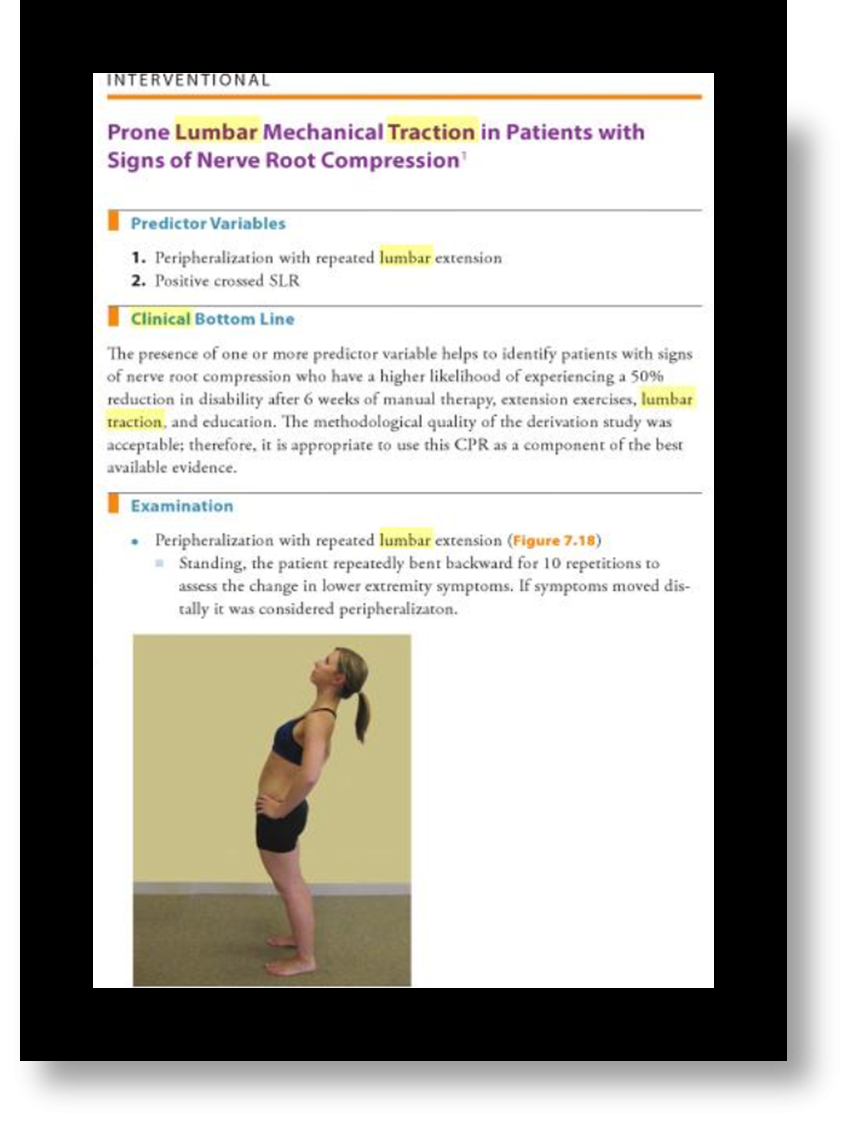 This interesting study (secondary analysis of a RCT) assessed whether DP guided management (10 sessions with a PT) and advice was more effective than advice alone (2 sessions) in a group of patients with back & leg pain.
The conclusion suggests those with reducible disc lesions are helped more thru 10-weeks of DP exercise than with advice alone.

These results however were not sustained and though pain-relief was noted thru 10weeks there were no differences in ‘activity limitations’ or between groups when assessed at long-term follow up. So it was effective in giving rapid, albeit brief pain-relief…..when compared to nothing!
Studies of this type (comparing relatively ‘elaborate’ interventions to extremely minimal ones) always beg the question: shouldn’t the “response” be monumentally better vs only marginally better (and not just short-term) IF in fact the treatments were truly effective?
Ostensibly 10 PT sessions would likely be 10 times the cost of 2 and the benefit of short term pain reduction with NO difference in activity limitations or long-term improvement is troublesome. This especially considering DP is proffered as not only a pain-modifying activity (requiring very intense and elaborate training for the practitioner and efficient compliance from the patient) but also, as the name implies: a ‘reducible’ disc treatment.
Of course natural attrition of pain and self-healing are constant activities of living organisms but we’d like to imagine our interventions make greater differences than to just be “coincidental passengers” with innate.
Comparisons of Chiropractic and exercise to Mackenzie DP have yet to establish superiority….or even dramatic advantages over ‘standard-of-care’ but it certainly warrants inclusion in our treatment arsenal and assessing for a DP is better done than not in most cases.

So practicing ‘charismatic’ attributes and honing the skills needed to ‘close’ a high percentage of new patients are vital for big success. Additionally it seems to me the reason for ultra-high power Lasers (or Lasers of any sort), radiographs, “subluxation-detectors”, “high-tech” adjusting guns, magnetic therapy and all sorts of other “coercive” therapies, tests & supplements is that we’d rather NOT be salesmen…we’d rather be like oncologists, surgeons and engineers; offering indispensable “argue-proof” therapies and in full control of the conversation. The problem is nothing in ‘physical medicine’, diagnosis or treatment is either very reliable or at all valid (not that surgery or shots ARE…but the point is obvious). That many patients’ conditions and their response to treatment is very often ‘tepid’, self-correctable-over-time (with or without treatment) and/or non-responsive is unarguable. So sales-tactics and proper, effective closing-techniques and tests/devices with unique-selling-propositions ARE indispensable for success.

The patient interaction must be one of adding extreme value and that is more often than not by way of “motivation by exaggeration”. What that means (stolen from a famous practice consultant) is that any and all benefits (or perceived benefits) MUST be highlighted & explicated in the best possible light. In this way things like natural-pain-attrition, cyclical symptoms and symptom “switching” can all promulgate the patient’s approbation of care, continuation of care and referral of others. The patient is taught to recognize even mundane changes as part of the treatment and important signs of response. As any of those in practice for 30 plus years realize though this may seem ‘harsh’ it is ultimately the case to build solid retention. Fortunately much of what we do is relevant & effective so we have that on our side.

After a decade in practice I began to think ‘disc’ problems were not responding as I would hope they would. This concern is a major one since a vast majority of our most motivated and disconcerted patients are dealing with a disc hernia or other disc issue. I began to investigate the VAX-D and the concept of decompression and I was sold. Twenty year later I may have altered my level of skepticism toward ‘magic decompression machines’ but not toward the potency of traction-based therapies and the amazing “sell-ability” and relevance to patient retention.

A compression issue simply ‘demands’ a ‘decompression’ treatment solution. Intuitive and logical assessment never guarantees a great outcome but it sure is a lot easier to sell and relate than an ‘irrelevant’ procedure. IF a patient feels better lying down ‘decompression’ is NEVER an inappropriate treatment. That a patient already tends to understand this cannot be over emphasized. The ROF’s must make clear the interconnection and natural benefit decompression will create…BUT that it takes time, commitment and a multi-focal approach. It is in allied treatments where “sell-ability” and strong closing makes its’ mark. Our Kdt table features, “open” belt and pertinent classification are designed to focus patient-problems TO table-solutions.

Most of us realize head-space is vital for both success and failure, and as Zig Zeigler points out: “if you think you can or you think you can’t you’re probably right”.  The most successful DC ‘closers’ are those who attend to their patient’s head-space needs…they have a knack of getting inside their zone and more-often-than-not ‘fulfilling’ their needs. Some have an intuitive ability and need little coaching others spend a lifetime never quite perfecting it. The famous (4) personality types (amiable, analytic, expressive & driver) give a great framework to create affinity, uniformity-of-purpose and matching needs with the patients’ needs. It does seem that charismatic people (typically self-confident, positive and vivacious) just attract more people to and, with minimal training “close” and retain more new patients. We all recognize often the best, most erudite “doctors” may well be less successful than their charismatic and mildly less-competent colleague. There is no question a single-minded purpose works (which often means finding ‘one’ technique, one-ROF, one recommendation of care-plan and sticking with it almost dogmatically). In addition making money THE major priority are necessary attributes of long-term success. “Take care of the patient and the money takes care of itself” works well as rhetoric but typically fails in a real-world clinic. The only way it works is IF you hire someone with money as their single-minded purpose. SOMEONE in the office needs that as their priority…! That purpose, though appearing ‘in conflict’ with the patient’s needs must be understood and made a central attribute. The law of fair exchange mitigates this ‘cross-purpose’ and NO patient who is unwilling or unable to understand it fully should ever be accepted…except perhaps for emergency care only.

So what to do? Like inherent pessimistic vs. optimistic personality traits, charism might be in-born, but recognizing the traits and having a model/mentor to rely on is the best starting point. A practice coach may be necessary as well as practicing “closing” with staff, family and friends. These practice sessions can really hone your skills and start to help you ‘create’ your charism. Goals of new patients and cash flow are of course as vital as clean headrest paper. The great country song title: “if you don’t know where you’re going you might end up someplace else” puts a fine point on it.