Conclusion: There was no difference between groups after treatment, at 6 months or 12 months. Both groups were much improved after one year. There was no added benefit of specific exercise which targeted movement control impairment.

Comment: It is fairly consistent that RCTs comparing specific exercise vs. general exercise (resistance and endurance training) appear matched in overall effectiveness. Many clinics use treadmills, Thera-bands etc. and give every patient a similar program without particular emphasis on “motor control” or motion impairments (for NSLBP). A graded general-fitness rehab protocol improves results, compliance and patient satisfaction vs. passive procedures alone in my experience. My personal experience also suggests the Stabilizer (TrA/multifidus control strate 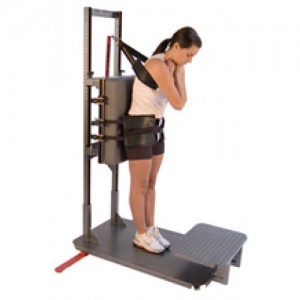 gies) and movement-impairment protocols are effective in many cases where general exercise fails.

However the premise of the ATM2 was to give a clinic the ability to do very intense and specific exercise inherently tailored to the individual…but without any specific reference or excessive “testing” excepting “is your movement now pain free?” For those who are interested in exercise rehab and have never experienced the ATM2 I strongly urge you to look into it as an effective rehab solution for those patients who have tried a general-fitness program but failed to improve their Movement disorder issues.

The biomechanical effects of two-step traction on the lumbar spine were investigated. During global axial traction, the intradiscal pressures at all MSUs (motion units) decreased and this resulted in increased stress on the fibers of the annulus fibrosus in the posterior region. The stress on the fibers of the annulus fibrosus in the posterior region was higher for the L4–L5 and L5–S1 MSUs than for the other MSUs. The results of the current study may explain why protrusion during excessive traction can occur. When the annulus fibrosus is weakened by degeneration and/or herniation, it could be damaged more easily by stress concentration, especially at the L5–S1 MSU. Axial traction therapy should be used with caution in patients with intervertebral disc damage at the L4–L5 and/or L5–S1 MSUs. Thus, 1/3 BW was assumed ideal for global axial traction in this study. Previously published experimental studies have shown that extension motion increases intradiscal pressure at the intervertebral discs (Sato et al., 1999, Rohlmann et al., 2001). Thus, proper local decompression helps decrease the risk of intervertebral disc damage and increases the beneficial effects of reduced intradiscal pressure. Typically, up to half of a patient’s body weight has been used for axial traction force however, No studies have documented the force transmitted through the vertebrae, intervertebral discs, and ligaments, and the translation of the vertebrae during traction and local decompression is also unknown.

Comment: part 2 will discuss what the researchers did and its clinical relevance.